Ophiuroids are the most speciose group of echinoderms with over 2000 described species (Hendler et al. 1995; Stöhr et al. 2012). They occur in virtually every marine environment from the poles to the equator, and are found at all depths. Brittle stars have even been discovered in tropical anchialine caves (Mejía-Ortíz et al. 2007). Ophiuroids are known to form dense aggregations (hundreds of individuals/m2) both on and within the bottom substrate (Hendler 1991). Despite their abundance and ecological dominance, much is unknown about these organisms largely due to their cryptic nature and often deep-water habitat.

A “typical” ophiuroid has a central disc with five slender, snake-like arms extending from the disc. Rarely, individuals possess more than five arms (Fig. 1), at most ten. Arms coil vertically in the snake stars and branch extensively in the basket stars (Fig. 2). Arm length is usually several times the diameter of the disc, but several prominent groups have arms that are many times longer. Ophiuroids are not large animals; disc diameters typically range from 3 mm in smaller species, to as much as 150 mm in the largest basket stars (Stöhr et al. 2012). 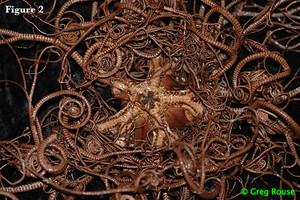 Ophiuroids rely on well-developed arm musculature for the characteristic lashing movements of their flexible arms. They lack an anus and have a single digestive opening surrounded by five jaws on the ventral surface (Fig. 3). This mouth opens into a sac-like stomach confined to the central disc. The entrance to the water vascular canal, the madreporite, is located ventrally on one of five oral shields. Also on the ventral surface, at either side of each arm base, is a genital slit which serves as the opening to the genital sacs, known as bursa. Like the stomach, these sacs are typically restricted to the central disc (Fell & Pawson 1967); serving as an outlet for gametes or a brood chamber for developing embryos (Hendler 1991). Ophiuroids are most easily confused with asteroids, but are readily distinguished by their laterally flexible and sharply demarcated arms, which are frequently cast off, thus the name “brittle” star. In contrast to asteroids, ophiuroids lack pedicellariae (modified pincer-like spines) and suctorial tube feet, using the tube feet primarily as sensory tentacles. Another feature that distinguishes ophiuroids from asteroids is the closed ambulacral groove of ophiuroids. Opposing ambulacral plates fuse in ophiuroids to form articulating vertebrae, typically surrounded externally by ventral, lateral and dorsal arm plates. Spines are often found projecting off the lateral arm plates (Fell & Pawson 1967).

Ophiuroids feed by active predation, scavenging, and/or deposit and suspension feeding (Hendler 1991). Certain species are known to be light-sensitive, and have the ability to change color and respond rapidly to light. It has been demonstrated that certain calcite arm ossicles, the individual calcium carbonate skeletal elements that make up the echinoderm endoskeleton, are arranged into microlenses and used as photoreceptors (Aizenberg et al. 2001). Ophiuroids are also capable of bioluminescence via photocytes under nervous control (Dewael & Mallefet 2001). Only a small proportion of ophiuroids have been surveyed for bioluminescence, with 77 of the 220 tested species having demonstrated this ability. Interestingly, no basket stars or snake stars are known to be bioluminescent (Mallefet pers. comm.).

Reproduction in ophiuroids is primarily sexual (Hendler 1991). Asexual reproduction is rare and occurs primarily by fissiparity, where a single individual becomes two by splitting its disc (Emson & Wilkie 1980). Interestingly, fissiparous species are often 6-armed (Hendler 1991). Sexually reproducing ophiuroids usually have separate sexes, but hermaphroditism is known in a small proportion of species, most of which brood their young (Hendler 1991). Ophiuroids develop via one of three larval types or have direct development where young develop within the genital bursae or ovaries of the adult. The feeding, planktonic larval form unique to Ophiuroidea is the ophiopluteus (Fig. 4). There are a variety of non-feeding larval forms, including the reduced ophiopluteus, doliolaria, and barrel-shaped vitellaria (McEdward & Miner 2001). Larvae are bilaterally symmetrical and posses a complete digestive system, characteristics not retained in adults. A number of classification schemes have been proposed for ophiuroids over the past two centuries, the major difference between them being two versus four divisions within the class. The two-division system was first proposed by Müller and Troschell (1840), who used Euryalae Lamarck 1816 for all forms with branching and/or vertically coiling arms, and Ophiurae for all other species. This classification system was followed by Mortensen (1927) and also by Fell (1960) in his synopsis of the extant ophiuroid genera. The four-division system was proposed by Matsumoto (1915, 1917) during his work on Japanese ophiuroids and followed by Clark (1915, 1939) and Murakami (1963). The four-division scheme was based on few morphological characters, mainly presence/absence of dorsal arm plates, articulation of the genital and radial shields, and shape of the vertebrae (Mortensen 1927; Smith et al. 1995). The four divisions were Phrynophiurida (=Euryalae + Ophiomyxidae), Laemophiurida, Gnathophiurida and Chilophiurida (later three groups=Ophiurae). Recent phylogenetic and classification studies have favored the two-division system, using Euryalida (=Euryalae sensu stricto) and Ophiurida (=Ophiurae) (Smith et al. 1995; Martynov 2011; Okanishi et al. 2011).

Euryalida comprises the basket stars and snake stars. This order historically contained four families, Asteronychidae, Asteroschematidae, Euryalidae and Gorgonocephalidae, but recent phylogenetic work has reduced this number to three (see below). Currently, there are 47 described euryalid genera and 181 species (Stöhr et al. 2012). Euryalids lack dorsal arm plates (Fig. 5) and have vertebrae that articulate by broad, hourglass-shaped ossicles, in comparison to the ball-and-socket joint characteristic of ophiurids. This allows greater flexibility in arm movement and the characteristic vertical coiling associated with euryalid species (Fell & Pawson 1967). Apart from the dorsal radial shields, the central disc is typically covered only by soft dermis. Euryalids have long been presumed to be more basal than ophiurids (Baker 1980), due to several morphological character states shared with fossil ophiuroids that do not occur in modern ophiurids (Fell 1962). However, euryalids also possess derived morphology, such as hook-like arm spines, thick skin covering the disc and arms, and reduced calcium carbonate armature (Hendler & Miller 1984), and the fossil record does not support an earlier origin for this group (Smith et al. 1995). In fact, a recent molecular study suggests that euryalids may have been derived from an ophiurid ancestor (Perseke et al. 2010).

Ophiuroids have a long evolutionary history extending back to the Early Ordovician (~480 mya). The oldest known ophiuroid is Pradesura jacobi from the Early Ordovician, discovered in southern France (Dean Shackleton 2005). Early-mid Paleozoic ophiuroids belonged to the extinct group Oegophiurida and differed from modern ophiuroids in their open ambulacral groove and unfused ambulacral plates, much like modern asteroids (Fell & Pawson 1967). However, these archaic ophiuroids were similar to modern ophiuroids in their distinct central disk, jaw structure, general vertebrae characteristics and presence of a dental plate (Martynov 2010). Brittle stars appear to have undergone a radiation in the Late Paleozoic – Early Mesozoic (Stöhr et al. 2012) resulting in forms that in some cases can be allied with modern families like the Ophiacanthidae, Ophiuridae and Ophiolepididae (Hess 1962; Thuy 2011). Most modern families however appear to have originated in the Late Mesozoic (Jagt 2000; Thuy & Kroh 2011). The earliest fossils definitively attributable to modern euryalid families, dating to the middle Miocene, belong to the Euryalidae and Gorgonocephalidae (Kroh 2004).

Currently, only one comprehensive phylogenetic study exists for ophiuroids, that of Smith et al. 1995. In this study, only a proportion of recovered relationships were well supported by morphological or molecular data, particularly where deep branches in the tree were concerned. A rapid radiation early in the evolutionary history of ophiuroids is a likely explanation for this lack of support, and suggests that obtaining a well-supported phylogenetic hypothesis for ophiuroids will be problematic (Smith et al. 1995).

In a recent study, Okanishi et al. (2011) examined relationships within the Euryalida using mitochondrial and nuclear ribosomal genes. These authors confirmed the monophyly of the orders Euryalida and Ophiurida. Two of the four euryalid families (Asteronychidae and Gorgonocephalidae) were supported as monophyletic, while the family Asteroschematidae was found to be paraphyletic. The authors suggested merging the families Asteroschematidae and Euryalidae, using the earlier family name Euryalidae (Gray 1840), and recognizing three subclades within this family, Asteroshematinae, Euryalinae and Astrocharinae. Interestingly, within the Gorgonocephalidae, there was no support for grouping species based on the presence or absence of bifurcating (branching) arms (Okanishi et al. 2011). Thus, it appears as if this seemingly complex morphological feature has evolved multiple times within ophiuroids.

Fell, H.B. 1960. Synoptic keys to the genera of Ophiuroidea. Zoology Publications from Victoria University of Wellington 26:1-44.

Fell, H.B. 1962. Evidence for the validity of Matsumoto’s classification of the Ophiuroidea. Publications of the Seto Marine Biological Laboratory 10:145-152.

Kroh, A. 2004. First fossil record of the family Euryalidae (Echinodermata: Ophiuroidea) from the Middle Miocene of the Central Mediterranean. In: Echinoderms: München. Heinzeller and Nebelsick (eds.), pp: 447-452.

Martynov, A. 2010. Reassesment of the classification of the Ophiuroidea (Echinodermata), based on morphological characters. I. General character evaluation and delineation of the families Ophiomyxidae and Ophiacanthidae. Zootaxa 2697:1-154.

Matsumoto, H. 1915. A new classification of the Ophiuroidea, with descriptions of new genera and species. Proceedings of the Academy of Natural Sciences of Philadelphia 67:43-92.

Matsumoto, H. 1917. A monograph of Japanese Ophiuroidea, arranged according to a new classification. Journal of the College of Science, Imperial University of Tokyo 38:1-408.

Mortensen, T. 1927. Handbook of the Echinoderms of the British Isles. Rotterdam.

Murakami, S. 1963. The dental and oral plates of Ophiuroidea. Transactions of the Royal Society of New Zealand 4:1-48.

Thuy, B. 2011. Exceptionally well-preserved brittle stars from the Pliensbachian (Early Jurassic) of the French Ardennes. Palaeontology 54:215-233.